Who doesn’t love a good Netflix binge on a day off? I remember when I would have to stay home sick from school and my parents would set me up in the living room in front of the TV, mounds of pillows and blankets, liquids to hydrate with and the remote. They may have set me up for these future binge marathons now, and with the invention of apps like Netflix and Hulu, SlingTV and VUDU you’re all set.

I have several moods when I start to binge: comedy, familiar and movies. It might be difficult to classify a movie binge (unless maybe if it’s a series of movies like Underworld) but somedays I just get into that mood of wanting to watch movie after movie.

Shows to binge when you want a laugh:

I was never super into this show when it was actually airing new episodes on TV, probably because I was too young (it premiered in 1994, I was 6) but lately this has been a lifesaver. Watching these 6 friends go through semi-normal life situations in NYC is entertaining. I sure laugh a lot! Thankfully all seasons are on Netflix so I can just go through season upon season when I’m in the mood to laugh. I’ll be upset if Netflix takes it off anytime soon.

This isn’t as established as FRIENDS but it’s super cute and funny. It follows Emily Osment’s character who wants to be a chef but is a little scatter brained and likes to help friends, even if it doesn’t turn out well. Throw in a nerdy millionaire who falls in love with her, but they never seem to work out, and you’ve got yourself some laughs for a few hours. I found it on Netflix randomly one day, but it only has 5 seasons and I don’t think Freeform renewed it.

When I want that familiar, ‘home’ feeling: 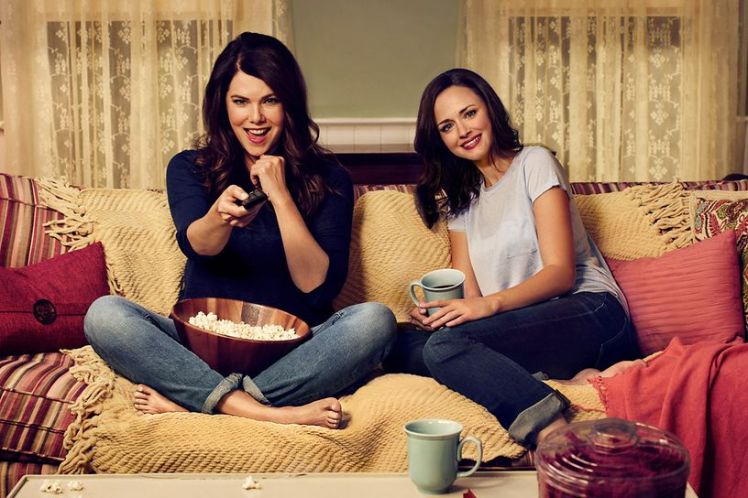 I can’t say how much I love this show, and it’s for many reasons. I grew up watching this series with my mom and sister (my sister is completely obsessed and scoured the world till she found all the series on DVD). I remember coming home from school and sitting at the kitchen table watching either new episodes, or re-runs of these women. That’s one reason why I absolutely adore this show.

It’s so unique of a concept too, and the production and writing is amazing. I read somewhere this is one of the shows that has the most dialogue in each episode (they talk real fast). This mother-daughter duo go through life together as best friends and battle obstacles like a prep school, reconnecting with wealthy grandparents (who mean well) and Yale where Rory loses her way and then finds it again! Also there is this long drawn out romance between Lorelai and Luke that you can NOT help but root for (though I liked Alex as well, he was the coffee shop owner who took her camping).

What’s fun is that this show has connected me with friends throughout life. My now store manager is a huge Gilmore Girls fan as well and when she first started out as an associate we instantly bonded when I saw her tattoo of ‘In Omnia Paratus‘ (Ready for anything).

Thankfully you don’t need to scour the sphere for the episodes because Netflix has them all to binge on! Also, numerous TV channels still air reruns on a daily basis.

Bonus: Gilmore Girls has such a huge following that Netflix did 4 mini series with the cast to show what their all up to lately. It follows the seasons and certainly does the original series justice. I just hope they do another…

Pretty much any Food Network competition show gives me that familiar feeling. I grew up with Food Network and just cooking in general, pretty much life revolved around the kitchen for my family (and still does). We always congregated in the kitchen to talk, cook and eat and because of this Food Network is a huge channel for my entire family. We watch a lot of shows but personally, I love competition shows like Chopped or Beat Bobby Flay. I kind of already admitted to binging the Holiday Baking Championship the other day but these shows just pull me in.

I use my SlingTV to watch the majority of my FoodNetwork shows but I know there are some on Netflix too.

You can laugh all you want, but I dig these movies (granite there are only two thus far, but the third and final movie is set to release February 9th!!). I came to the game late with the books and ended up borrowing one as a joke from a coworker years ago before the first movie was set to premiere; I ended up reading it in one day and ordering the entire series online so I’d have my own set.

The movies, while not quite as good as the books, have a great cast and are filmed in one of my favorite cities, Seattle! While there is a lot of controversy over the storyline I’ve taken it for what it is, an enticing sexy romance that follows a girl who explores her sexuality and who she is as a person. Dakota Johnson portrays Anastasia Steele beautifully and has become a favorite actress of mine, and Jamie Dornin… well, he’s got a great pack of abs haha.

They make a great rainy day binge though if you’re looking to have a little fun, maybe even have a friend over…

This is the best B-list movie ever! It’s hilariously entertaining where it follows these two girls (vampires) who originally escaped school but get dragged back, where the one sarcastically refers to it as… Vampire Academy.

This vampire movie doesn’t have any sparkles, they don’t even technically burn while in sunlight (though it irritates some). With this story there are three types of vampires: Strigoi (bad, stereotypical vamps), Dhampir (human/vampire hybrid and protectors) and Moroi (mortal vampires).

I tend to throw this on when there isn’t anything else good on and its been a long day at work, and generally there’s pizza involved. There’s a lot of one-liners that make you laugh out loud and cringe at the same time, but it’s good! Sweet Sassy Molassy.

What shows or movies do you binge on a day off? Have you watched any of mine?

I used to get made fun of for my middle name, now I've found how unique it makes me, and rock it! I'm a 30-something woman who loves to cook, read and go on adventures!